With August drawing to a close, it is time once again to recap the progress Hydranet has made throughout the month: new additions to the team, bugfixes tied to HDX/OHM, the introduction of on-chain settlement for the L2 ETH and ERCs on Hydranet DEX, and more.

On July 6, a rebase bug was reported for the first time. The bug occurred after a large amount of HDX was put into a staking contract, and that transaction happened to be the one that triggered a rebase. This created an unusually large one-time spike in APY that, during the rebase epoch, generated drastically higher payouts of staking rewards to holders and created an imbalance between the circulating supply of HDX and the total supply of HDX in the token contract.

There were initially a few different theories as to what caused APY to spike. One theory proposed that certain preconditions with bond sales could create a gap between staked HDX in the circulating supply and the total supply. After further analysis, it was concluded that the bond contract was not the cause. As the developers were researching the root cause, they set up a debugging environment with a testnet chain to replicate, exploit, and finally patch it. It was revealed to be an old bug with OHM contracts that was publicly disclosed in an April 2021 PeckShield audit report that OHM subsequently patched.

HDX was forked from OHM before the smart contract bug fix was implemented. The inherently immutable nature of smart contracts made fixing the bug on HDX by backporting it from OHM additionally challenging. Once a smart contract is deployed, it can’t be modified. To work around this, the fixed contracts will be proactively airdropped and require no user action.

Community Votes on how to Correct the Supply Gap 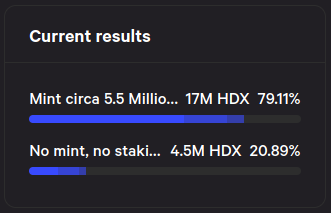 The next challenge was determining how to close the gap of approximately 5.5 million HDX between the circulating supply and the total supply. The two following solutions were taken to a community vote on Snapshot:

1.) Mint the excess tokens. By simply minting the difference, the gap would be closed. The disadvantage comes from the additional inflation that minting creates.

2.) Freeze staking for approximately 180 days or until the new Tokenomics are deployed. This would allow the total supply to catch up without inflating the supply, with the disadvantage being the potentially long freeze on staking rewards.

In an almost 4:1 vote, the community decided to mint the approx. 5.5 million additional tokens. At the start of the month, a few screenshots of the new UI design were teased. Seeking a fresh coat of paint for upcoming builds of the MCLW, Hydranet DAO issued bonds that specifically target improving the UX. Within 6 days of the bonds being issued, they completely sold out.

Connext state channels can now be settled on-chain without immediate dependency on Layer 2 protocols! Hydranet MCLW now fully supports the Connext dispute flow and acts as a watchtower for Connext Network disputes. With this addition, ETH-based funds in state channels are no longer dependent on obtaining direct access to a Layer 2 protocol. If, in some unseemly scenario, the L2 protocol that manages a state channel is unavailable or (worse yet) it has been exploited, the blockchain can be used as the master lever to retrieve funds out of the inaccessible state channel and send them back to Layer 1. On the surface, this process for settling transactions on-chain is similar to Lightning Network’s force-close feature.

In preparation for Atlas, the next stage of Hydranet DEX, we will be switching our Ethereum testnet environment over from Rinkeby ETH to goerli. While Rinkeby served as a great testnet environment for stage 1 (Lazarus) builds of the DEX, we believe that goerli is more robust for handling intensive workloads and helping us realize our development targets.

While the core focus of August has been on-chain settlements for ETH-based tokens, work has also resumed on implementing the “Taker Pays Maker” fee model and trading bots following the overhauls made to the DEX orderbooks in July (read our July update here).

Additionally, work to implement the new UI/UX into the DEX is already underway!

On August 27, the Hydranet team shared a near-final draft of the HDX tokenomics paper with key members of the team and the community, seeking further review and feedback. The tokenomics paper focuses on both the short-term (testnet) and long-term (mainnet) reward structures for HDX. The final HDX tokenomics paper is set to debut in September, and we are excited to present our vision for HDX’s ecosystem and viability!

The Hydranet team has had a few changes this month. We’re delighted to welcome the following new additions:

Pospatriot, a long-time veteran of the community, will be assisting the team with Marketing.

“Hi, I’m T-Яex and I’m super excited to be onboard to help spread the Hydranet vision across the world! My first involvement with crypto was back in 2017 and I have been following this project ever since. During the day I work as a developer at a tech company, dealing with multiple diciplines and my background is in game development. In short I’m a very creative person and a total tech-nerd, but I also love thrilling outdoors activities. My talents are like the hydras heads, multiple and dangerous.”

Additionally, Argon and Gainz have taken on more demanding roles within Hydranet DAO by joining the multisig team. Argon first joined the Hydranet team as a graphic designer. He designed the current Hydranet logo, made several aesthetically-pleasing inserts and graphics for our content, and spearheaded several UI/UX improvements for Hydranet MCLW. Gainz is a community veteran who has been instrumental in providing community assistance and moderation, including support for multiple aspects of beta testing Hydranet DEX. They have taken the positions previously held by Muppet and Sadhill, who have taken breaks from full-time commitment for personal reasons but remain with the team. 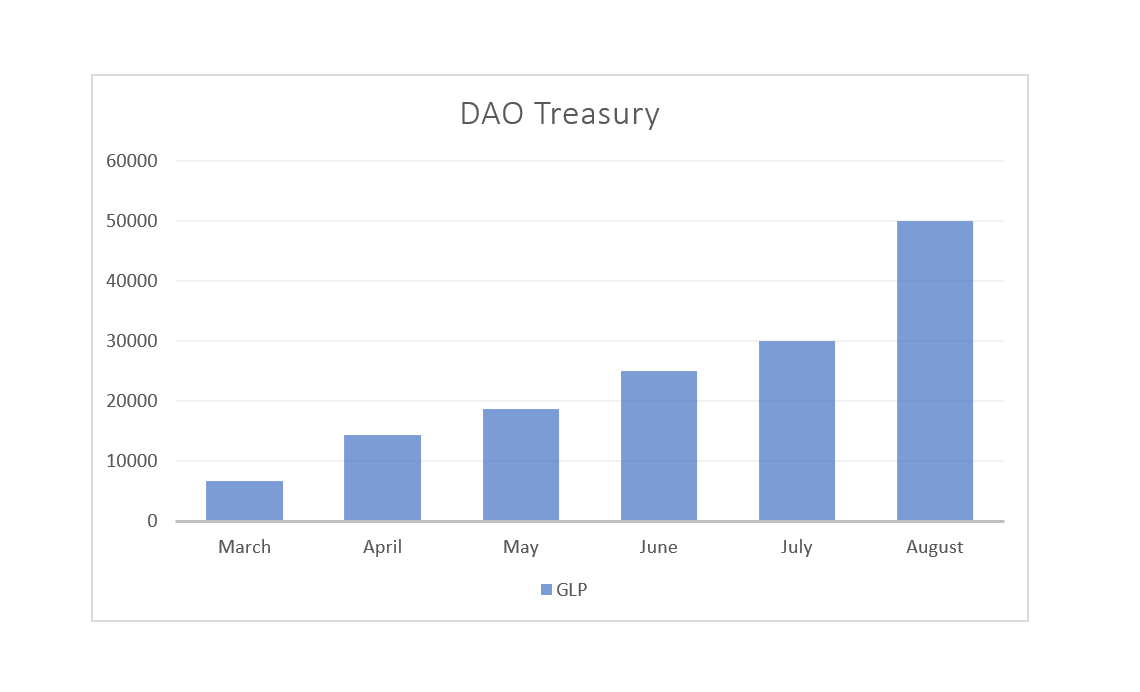 The Hydranet DAO Treasury has continued growing every month since its debut in March. It is now holding slightly over 50k GLP. The Treasury balance can be tracked here: https://debank.com/profile/0xc5888c4c261a1c5e8745eb1977eb54fcb21d2a28

Currently, bonds are unavailable for purchase. If and when bonds are issued in the future, there will be public announcements on our Twitter and Discord. Be sure to keep an eye out if you’re interested! They have been selling out fast.